Why should the Immune Health formula be used?

The chemistry that comes from the combined hybrid strains of Myshroom® medicinal mushrooms originally cultivated at research laboratories at universities shows that it (when consumed as a food):

Is a miraculous food that has over 4,000 beneficial chemicals including all of the essential amino acids, transition metals, enzymes, and proteins, which by far exceed the beneficial chemistry and nutrition of any other food on earth.

Modulates the immune system so there is no over activity of it, such as with autoimmune diseases.

Supports the body’s immune system to see and kill gram-negative bacteria diseases and removes the bacteria’s resistance to your immune system and antibiotics. (Polyamino acid molecules are in the mushrooms). The mushrooms contain campestrin, a natural antibiotic effective against Gram negative and some Gram-positive bacteria and have been used traditionally to treat tuberculosis and sinusitis.

Supports cell to cell communication thus supports aggressive healing by supporting the increased production of ATP, Redox molecules, and other beneficial chemistry so that your own stem cells can work more aggressively and efficiently in healing. Redox signaling molecules are the communication centers in your cells. These molecules are responsible for sending powerful messages that help rejuvenate, restore, and protect cells. Redox molecules signal when something is going wrong or needs to be changed, and then the body fixes the problem.

Gives the body a high level of energy which far exceeds any other food measured on earth. Using just 32 grams (12 teaspoons) of the product with water can sustain a person and it can provide all of the above listed. This has been tested. This is the best food for the famine regions of the world.

Shows there is no chronic or acute toxicity. Cell nucleus studies show no detrimental effects and DNA showed no mutations. Pregnant animal studies demonstrated there is no detriment to fetal development, and no LD50, a measure of toxicity that has never been shown.

Apparently produces no harmful side effects.

Is regarded as biological response modifiers, which basically means that: 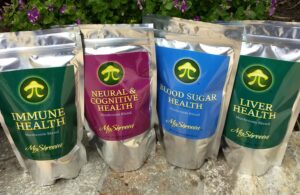